A downloadable game for Windows

Game Written and Developed by

As you come to the town of Wedmore, you see your dream castle in the
distance, on a dark forboding hillock.  Stopping at a local tavern, you learn

of tales incircling it.  This does not please you.
One such tale, is the story of Admorecs.  A wizard that lived in the
castle around 1289 A.D. It was rumored that he could talk to the undead from
the underworld.
A demon named Crsusponys, makes a deal with Admorecs.  If he could
enable the demon to cross over into our world, he in return would receive
power beyond his wildest dreams.
Time passed as Admorecs labored and finally found the key for the deal
to be fufilled.  Meanwhile, a cult was formed and on Oct. 31 1296 A.D.
Admorecs opened the gate and released the demon.
Now that Crsusponys was no longer forbidden, He entered our world with
a vengance. Terror errupted as the dead began to rise, and horror was upon
the land for 2 long years.  Evil ruled for this short time while the cult
grew in power.
The time was at hand for Knight Atharin to stop the rampage of terror,
and send Crusuponys back to hell.  In doing this, the King commanded him and
his armies to slaughter the cult members, and free the kingdom from the
demons.  As Crsusponys's amry was slowly defeated, he swore he would return.
A few minor demons escaped and went into hiding to prepare for the
return of their leader.  It is rumored that they live in secret, planning for
the time to bring back and unleash the ferociousness of Crsusponys and his
fellow demons!

edited by Edward and Roxanne Phillips
story by jim ball

In order to download this game you must purchase it at or above the minimum price of $3.41 USD. You will get access to the following files: 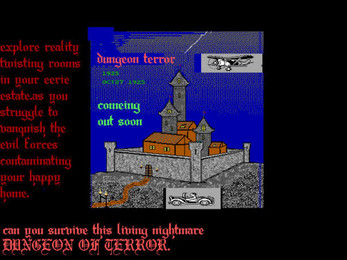